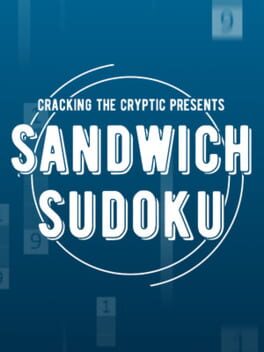 How can I find the best Sandwich Sudoku Mac CD Key prices?

It's easy - we collect and compare price information daily for Sandwich Sudoku Mac to help find you the best deals available from official retailers and popular third-party marketplaces, including sales and discount codes available worldwide.

How do I redeem a Sandwich Sudoku Mac CD Key?

Select a country, platform and service to find the best deal in your preferred region. Buy Sandwich Sudoku from your vendor of choice and redeem it to own a digitial copy of Sandwich Sudoku Mac that you can download and play.

In Sandwich Sudoku, the puzzle is presented with extra numbers outside the grid next to each row and column. These numbers indicate the SUM of cells sandwiched between the 1 and the 9 in that row/column. The logic required to solve the puzzles will appeal to anyone who enjoys normal sudoku and a bit of basic maths. Each puzzle here has been lovingly hand-crafted by Mark Goodliffe and Simon Anthony, the hosts of Cracking The Cryptic. They've even included their own hints on each puzzle to help if you get stuck. Mark and Simon have both represented the UK many times in the World Sudoku Championship.

Sandwich Sudoku does not have any videos to show at this time.